I confess to being slightly addicted to levitation photography lately. I had a bash in Southwold and ended up with my models looking like they could leap 10 feet from a standing start (pretty cool. Need to post those)... however I wanted to try my hand at something a bit more fun... and what could be more fun than 40 rainbow balloons, a pretty girl and yellowed late summer fields?

I persuaded a good friend (and wonderful model) Alicia and her fella Tony to come over and help me make the experiment... Here's one of the finished shots: 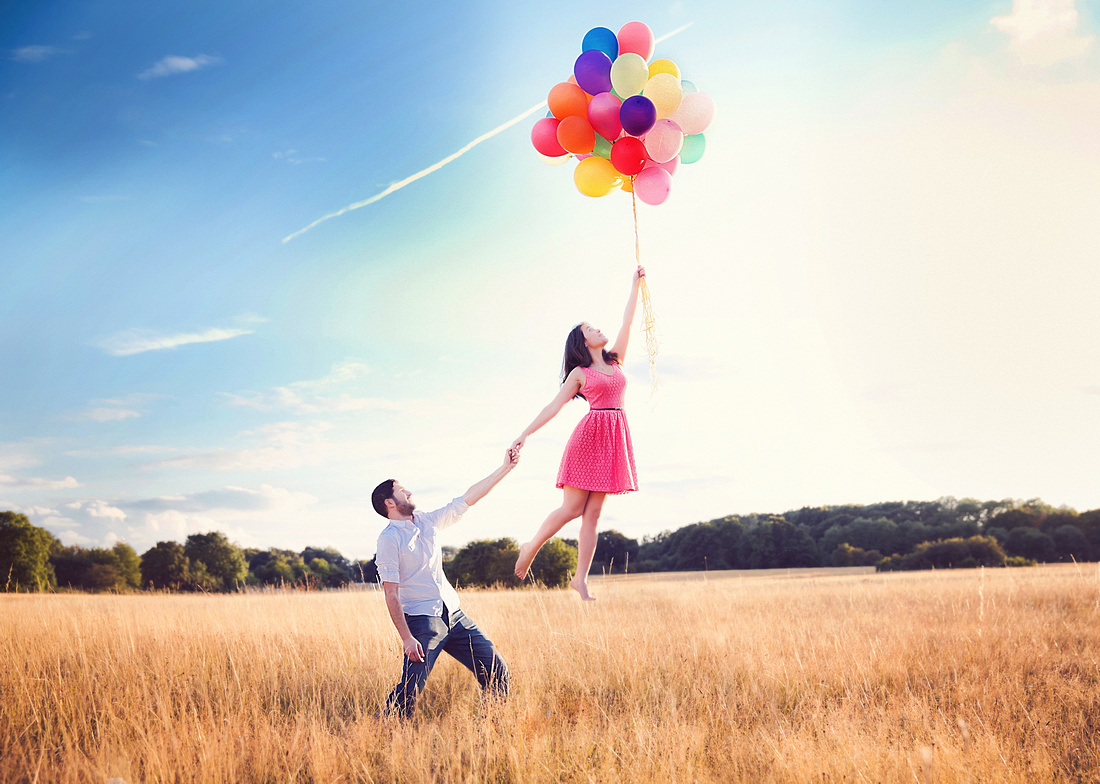 I just love the story it tells. When I posted it on Facebook last night I got enough messages saying 'how the hell do you do that??' that, on top of the Southwold session, I thought I'd demystify levitation shots and prove they doesn't take much in the way in the brains - just patience and basic ability with Photoshop layers. I don't propose to make an actual Photoshop  / Elements tutorial - there are enough around already... just thought I'd share the workflow for a levitation shoot!

1) Work out what you want to achieve. This might sound basic and it is... make sketches (doesn't matter if they're crap - it's about working out what goes where). Think about the logistics. The shoot is going to easily take you an afternoon from start to finish. Think about location. Think about where the light's going to be coming from. Think about shadows.

2a) Set up a trial for the posing. Number one objective - keep your model safe. We took a regular stepladder and clamped a couple of pieces of wood to it - and to stakes we hammered in the ground. Two triangles are suddenly a lot safer and Alicia had absolutely no problem standing on one leg right on the top (if your model doesn't have a cracking sense of balance either cover the ground in crash mats or rethink your plans and consider 5 inch levitation rather than two feet! We had fun trying to sort out where tension would sit in the body if Alicia was trying to fly away and Tony was trying to bring her down. Lots of play-acting and a certain amount of whooping :-) 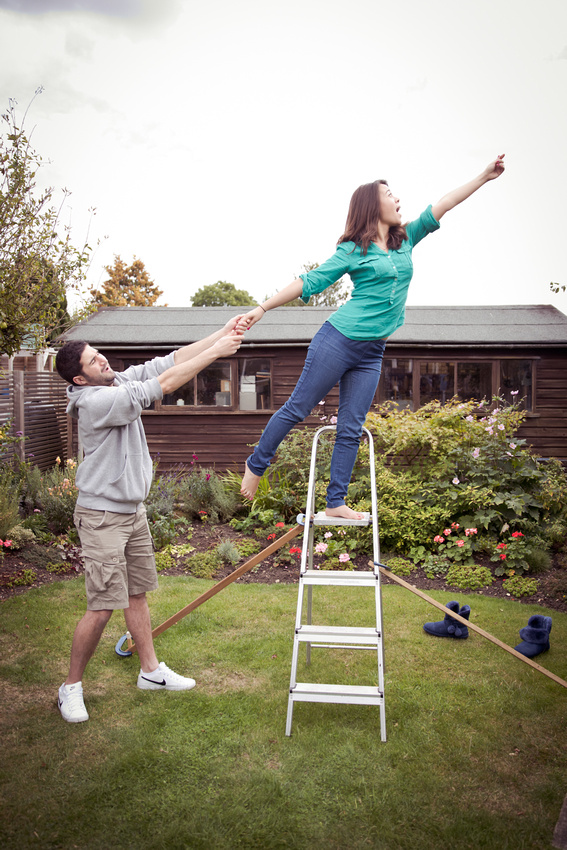 2b) Blow up a shed load of balloons. Find something heavy that you can tie them to so that they don't make an instant break for freedom in the fresh air. Much hilarity. 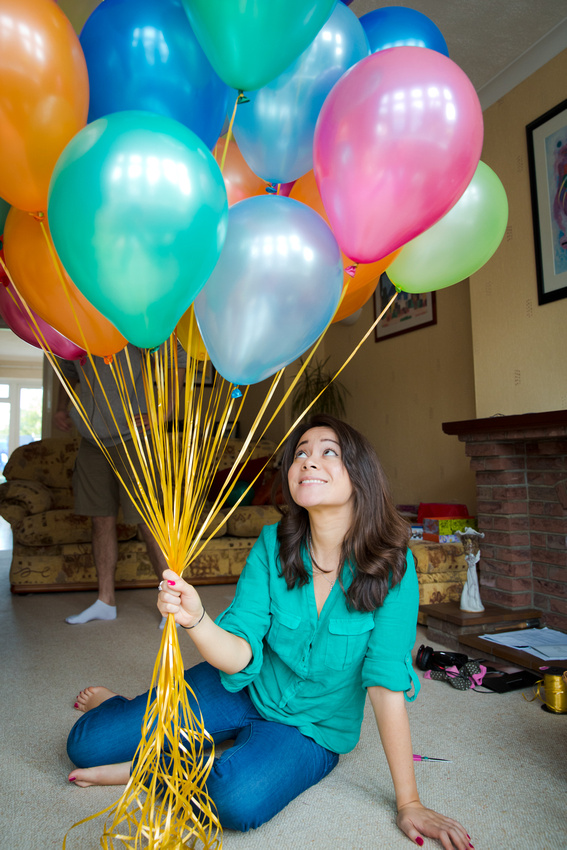 3) Get out to your location (ours was deliciously nearby as they had obligingly not cut the hay on Harpenden common) and work out which way the wind is blowing. You're going to need:

4) Put up stepladder (leave off the supports for the moment unless v wobbly - you only need it there a second) and mark where the legs sit. Get someone to stand on the ladder where you'll need to focus on them. Set focus then switch to manual focus and leave it the hell alone. The only work you're going to do with the camera from now on is press the shutter release button. For the record I shot this on a Canon f2.8 24-70mm IS lens on a 5D mk3 at ISO 160, 24mm, f3.2 1/400 sec. 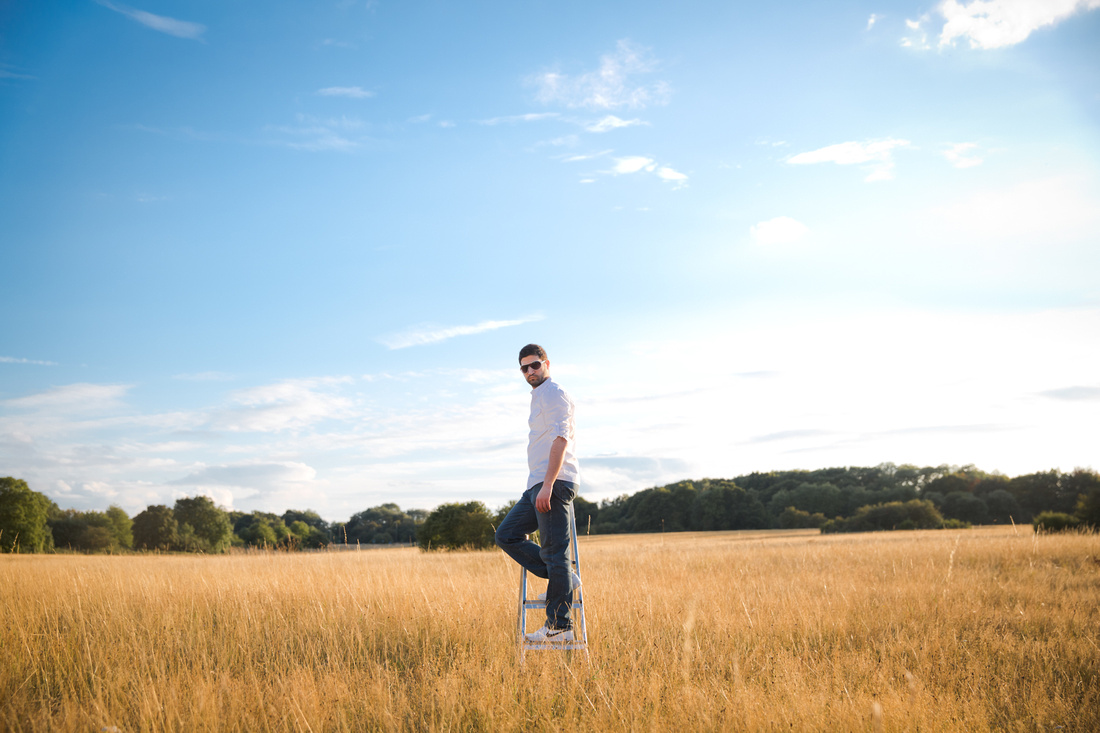 5) Take away ladder and shoot the scene with nothing there at all (actually there's a very small dogwalker, they don't matter. They're not going to appear in final image). This is going to be your background layer in Photoshop. 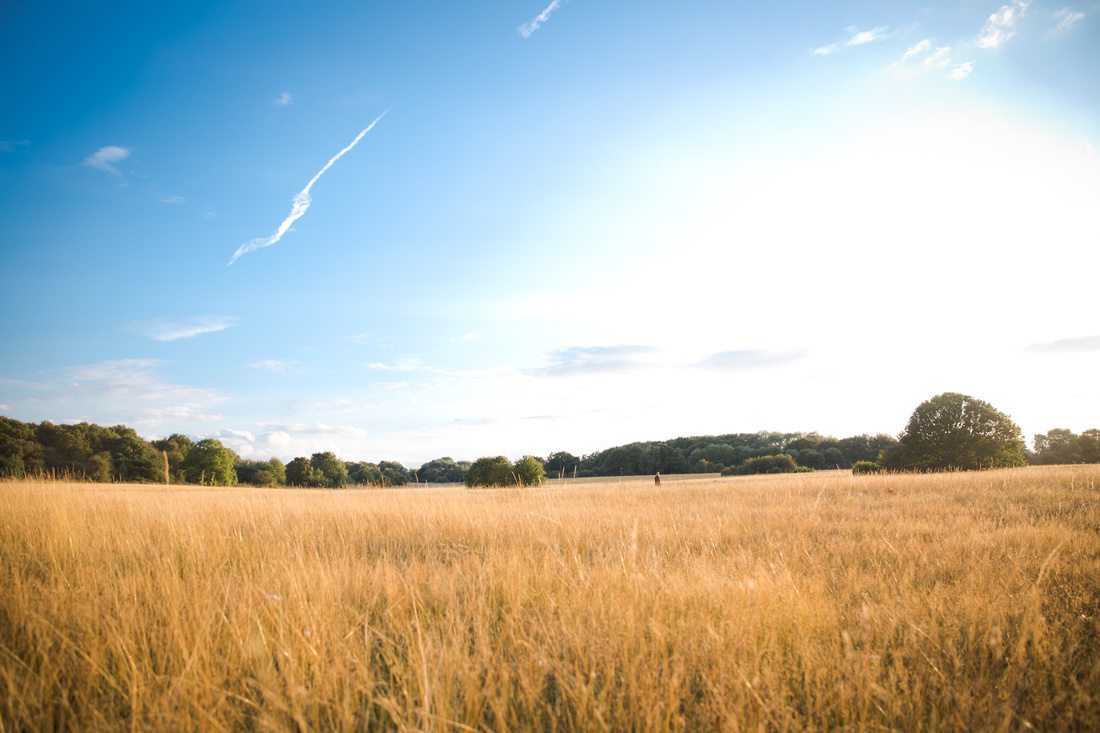 6) Put up ladder, make it safe this time. Model climbs the ladder and finds a pose that are going to work for the ultimate image. Think about the lines of the arms and legs and the balloon string. Despair that the balloons have somehow plaited themselves together in the wind. Swear loudly as the wind changes direction.

7) Make your shots. Yes you've just taken a lovely photo of a ladder. It's going to go away. 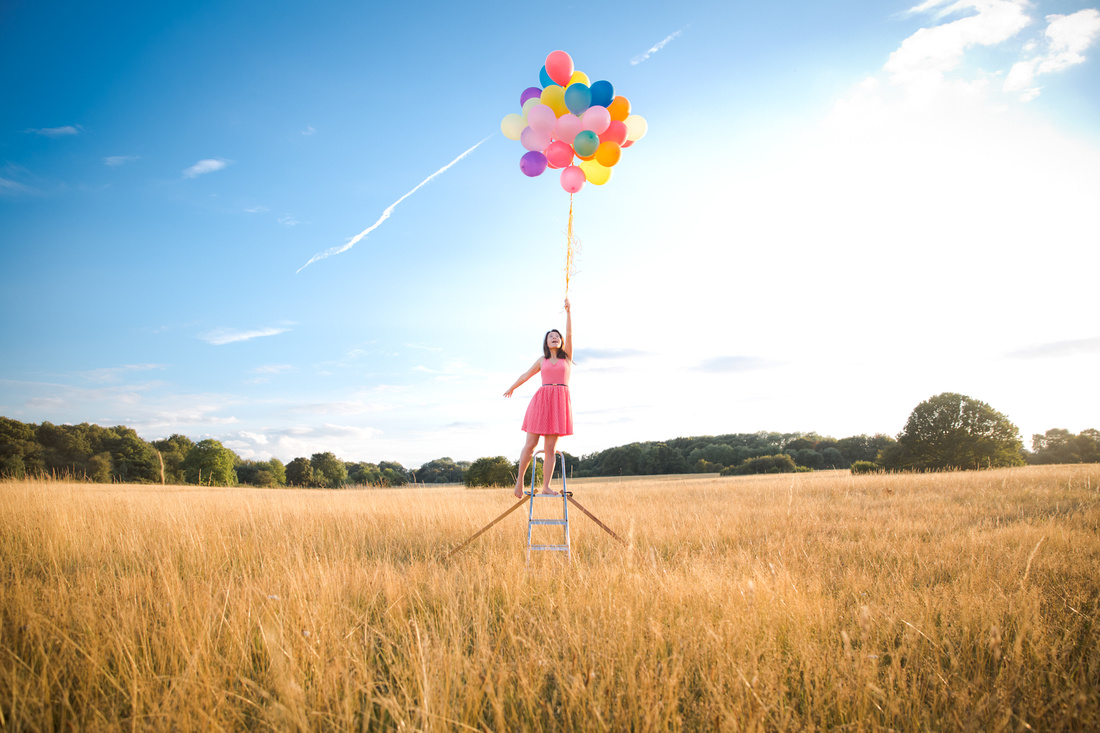 8) Pack up, come home (via the pub) load up your images and decide on your favourites. To make each image you need one background (the same each time unless you were a plonker and moved the camera) and one balloon shot.

9) Put your two images into Photoshop / Photoshop Elements. Layer the balloon shot on top of the background. And here's the sneaky bit: you put a 'mask' on the top layer (the balloons) and basically rub out the stepladder. The layer goes transparent and you see the nice clear background shot that's behind. You can see that's what I'm doing here: 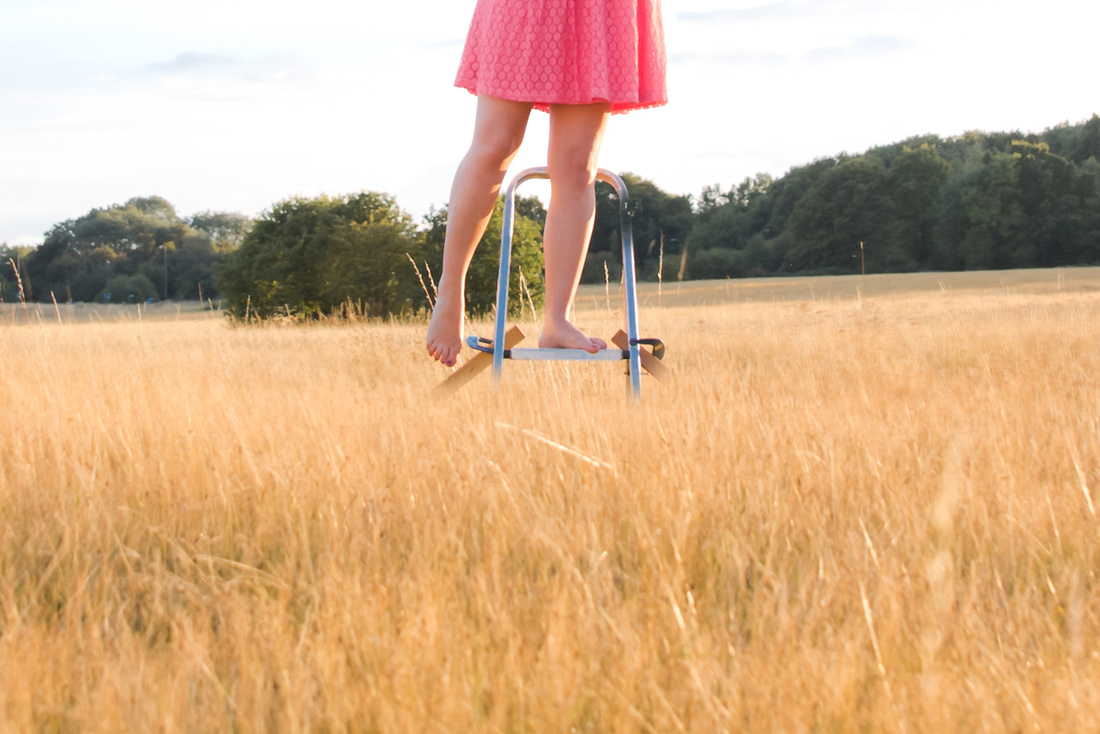 And so you get your image of floating girl, minus DIY paraphenalia... 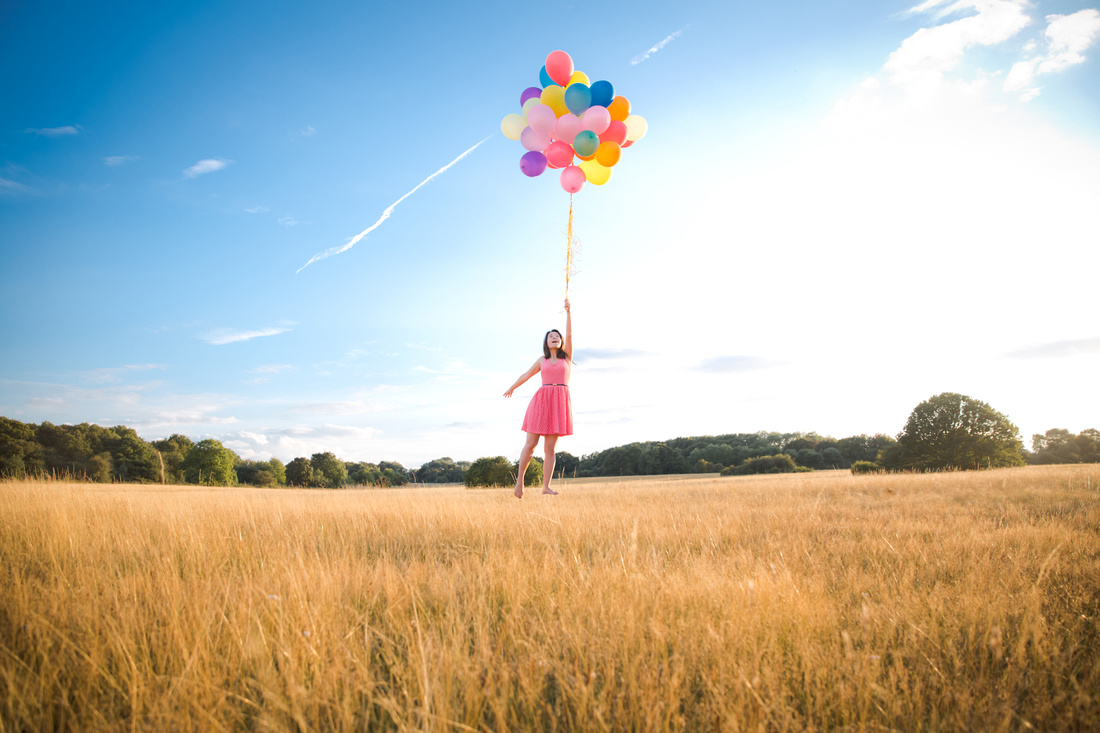 Finally, I added a few colour filters over the top of the combined image, to make it more Mariposa. 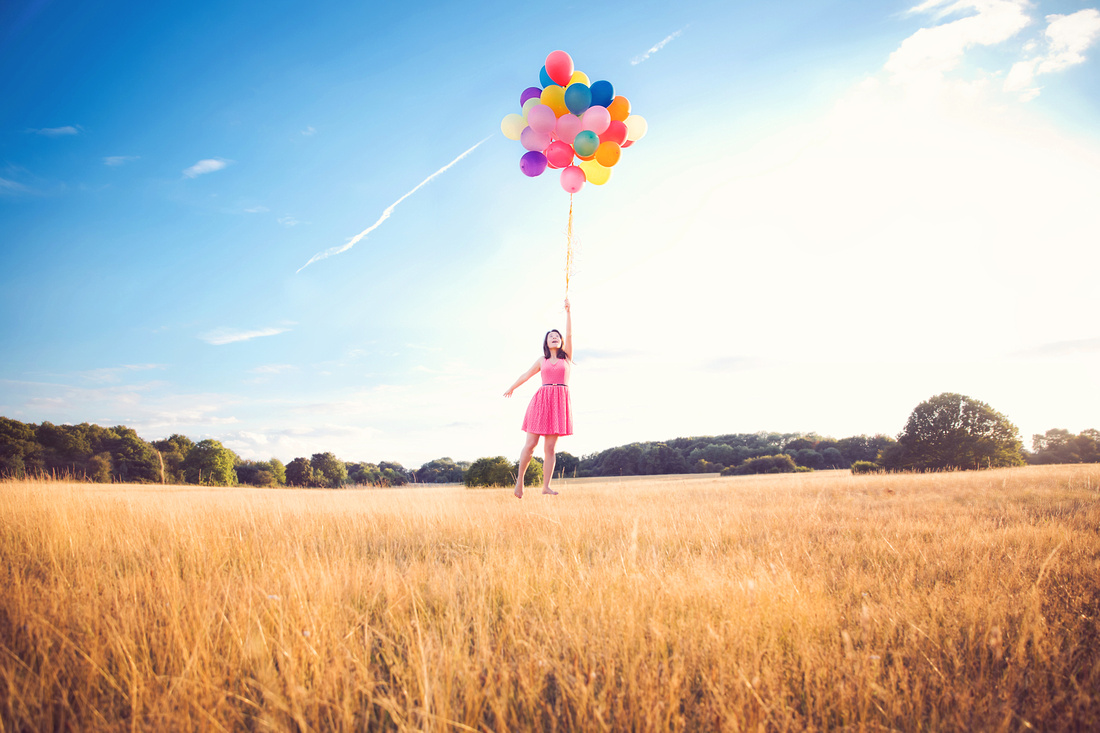 You can see it's not perfect - she's still fairly obviously standing. If I'd planned further I'd have had her stand on the other foot, point the first, and then photoshop that in. The light catches the bottom of her feet slightly bizarrely. And If I could have got her above the treeline (it was too high and we were too low) and into the sky I could have done what the heck I wanted with her... had her fly 20 metres above the land. But we get what we get. Next time I'll know more and will plan more. So there you go... It's great fun and is merely a bit fiddly and time-consuming rather than impossibly hard... and looks rather snazzy. Hope it inspires you to have a bash sometime!!